In 1958, Mao Zedong made sparrows enemy #1 and ordered all sparrows to be killed because he felt they ate too much grain and hindered food supply.

Three years later, China was hit with famine and millions dead of starvation. Killing sparrows didn’t improve agriculture and instead, worsened it.

“Hippity, hoppity your food is our property” -every insect in 1958. 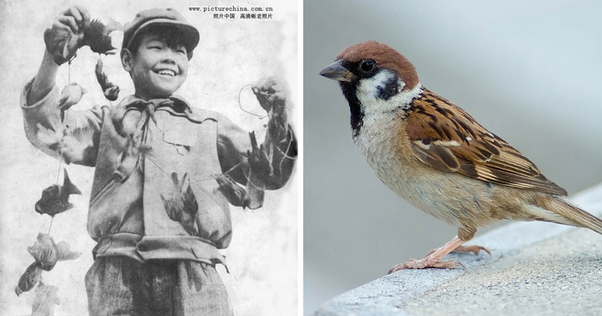 Without sparrows eating insects like locusts and caterpillars, insect population boomed and ate all the crops. Locusts proved to be the worst and flooded the countryside in droves. With no sparrows to control the population, the locusts and other insects feasted on grain.

Mao Zedong’s narrow-minded view on nature caused the deaths of 36 million people. The nationwide campaign to kill sparrows spread fast and in the first year, 2 billion sparrows were killed. This environmental disaster was so severe Mao quickly realized his mistake and stopped the campaign but it was too late. The sparrow population had drastically declined and Communist China had to ask the Soviet Union for sparrows.

The Soviet Union helped Communist China out by giving them many cute little sparrows but it took decades for the farming industry to recover.

Mao Zedong anti-sparrow campaign backfired, and i think we can all agree that it was’nt well thought out plan.