Almost. The year was 1887, and Germany was in the colony acquisition business, although the Kaiser and Otto von Bismarck were discovering that all of the really good ones had been taken. Samoa hadn’t, and although it wasn’t especially attractive, being very small, almost completely devoid of exploitable natural resources (the usual attraction for would-be colonizers), and thousands of miles from anywhere else of real importance (and a lot farther than that from Germany). But it was available, so to speak, and the Germans sent a couple of warships down there to see what they could do to change that fact. At about the same time, Hawaii’s King David Kalākaua decided that he’d like to form a Polynesian confederation, a mini-empire of the Pacific which the king would naturally head. Since it was his idea and all. He and his foreign minister, Walter Murray Gibson thought they’d start with Samoa and they rounded up a warship of their own to go down and woo the Samoans, apparently oblivious or at least not caring that the Germans were already doing some serious wooing of their own.

The Hawaiians found a suitable ship, the former guano (bird crap) hauler Explorer, buying her for the outlandish price of $20,000 ($528,000 in 2018), and commissioned her His Hawaiian Majesty’s Ship Kaimiloa (which translates to “Far Seeker” or Explorer), the only warship (ever) in the Hawaiian Navy. HHMS Kaimiloa needed a bit of work to get ready for the voyage and her new role, which cost another $20,000 or $40,000 or maybe more, and included four obsolete cannons and two Gatling Guns. They found a commander, a former Royal Navy lieutenant (and alcoholic), George E. Gresley Jackson, who at the time was in charge of the home for delinquent boys in Honolulu. Jackson got a few experienced sailors to sign on and took the rest of his crew from the reform school. Almost none of the boys had any maritime experience but some of them were in the school band, so there was that… 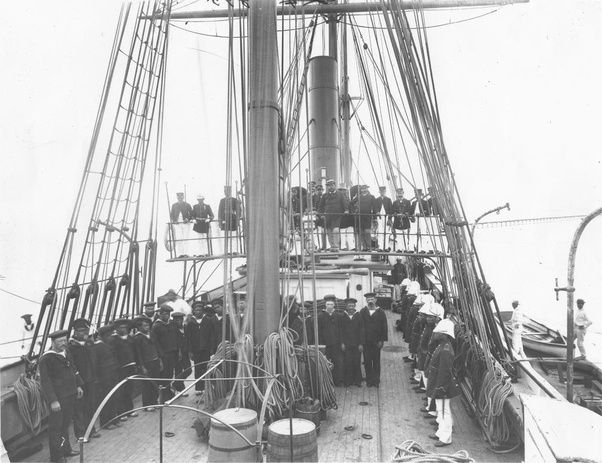 Kaimiloa was set to sail in April and then in early May, but Jackson had to deal with some personnel issues first. His gunner deserted, and then the boatswain, a key non-commissioned officer on the ship. The chief engineer and a lieutenant got into a dispute which they evidently tried to resolve with pistols, both of them becoming former officers at that point. Jackson also discovered that there weren’t enough provisions aboard for the voyage (which he correctly predicted would take a lot longer than the government optimistically estimated). He is supposed to have resolved this by trading off at least one of his cannons for some food, and more importantly, liquor. With everything more or less shipshape at last, Gresley Jackson put to sea on May 18, 1887, Samoa bound, trailing, as one author put it, “black smoke and gin fumes.”

Perhaps a bit concerned that Kaimiloa might run into a country that took the term “warship” much more seriously, the government had re-designated her as a “training vessel,” but kept the HHMS designation. This didn’t make the ship any more efficient or effective, as Kaimiloa was dead slow, smelly, dirty, and burned coal in her 60 horsepower steam engine at a prodigious rate with very little forward progress to show for it. Captain Jackson reportedly didn’t appear on deck for some days into the voyage and then came up to announce that the ship’s chronometer was broken and he had no idea where they were. Somewhat miraculously, given the circumstances, they managed to raise Apia, Samoa after a 29-day voyage, an average speed of 3.2 knots – about what you could do just by drifting aimlessly.

But they’d made it, and the delegation, headed by diplomat/commissioner John E. Bush, began their empire-building diplomacy. Bush was a bigger drunk than Jackson, however, and immediately impressed Samoan King Malietoa, who left a party hosted by the Hawaiian embassy early, saying, “If you came here to teach my people to drink, I wish you had stayed away.” The Samoans were favorably disposed to the Reform School Boys Band, however, as Bush and his delegation dove into the ongoing intramural conflict in the islands. Malietoa, on one side, was contending with Tamasese, a rival for power who had the full support of Germany, represented by a large mission and the corvette, Adler. At 1040 tons (Kaimiloa displaced 171 tons), steel and wood and armed with the latest in Krupp naval artillery, Adler was definitely one of those serious warships the people back in Honolulu had been worried about meeting. Adler shadowed Kaimiloa as the Hawaiians showed the flag and their support for Malietoa. 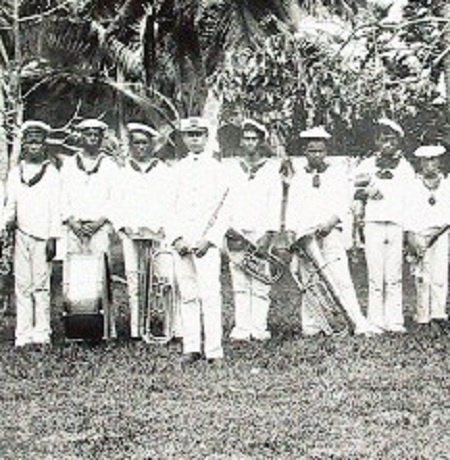 The Hawaiian Reform School/Navy band, at Samoa. The band was quite popular with both factions of Samoans and unlike the officers and professional mariners of Kaimiloa’s crew, generally comported themselves with dignity and respect.

The Hawaiians were quite fortunate, really, that they were dealing with the Germans, represented by the captain of the Adler, who, probably recognizing that the Hawaiians were self-destructing just fine on their own, decided he’d wait for clear instructions from Berlin before blowing Kaimiloa out of the water. At one point, the Adler’s captain even intervened to prevent some of Kaimiloa’s crew from blowing up their own ship.

Berlin wasn’t happy with the interference. At all. Chancellor Otto von Bismarck, hearing of the Hawaiian maneuvers, said, “King Kalākaua could be told that, unless he desisted from his insolent intrigues in Samoa, we should shoot his legs in two, despite his American protection.” Fortunately for Kalākaua and his legs, events in Honolulu conspired to cause the recall of Kaimiloa and the Samoa mission. By the time Adler got the word that the Kaiser would be just fine with sending the HHMS Kaimiloa to a watery grave, she’d plodded back to Hawaii, finally arriving home on September 23, after a passage of 32 days (2.9 knots, average speed).

So, Hawaii missed out on being a very early German conquest, avoiding (mostly by accident) a war that surely would have been short, decisive, and uneven. (Hawaii had about 200 men under arms at the time, and of course, Kaimiloa and her 2 or 3 remaining guns). King Kalākaua had real trouble back home, dealing with a bloodless coup that took most of his powers and a scandal involving a large bribe for an opium license. His PR problems certainly wouldn’t have been improved by getting maimed by angry Germans and he very easily could have suffered the same fate as Samoa, where the Germans eventually took control of the western islands as a protectorate in 1900. (Although the Americans and British probably would have taken the Hawaiian side in that conflict.)

And ironically, while the decrepit Kaimiloa would survive back in the merchant trade until 1910, her nemesis, Adler, didn’t make it out of the decade. She and two other gunboats faced down the USS Vandalia, USS Trenton, and the USS Nipsic in Apia Harbor, a tense standoff that ended when a hurricane hit the place in March 1889, wrecking everybody. SMS Adler, on the reef in Apia Harbor. She and two other German warships were lost, March 15–16, 1889, along with three US Navy vessels. The British gunboat HMS Calliope was able to escape to sea. 62 Americans and 73 Germans were killed.