The roots of many of the global political realities of today can be traced back to the events, alliances and outcomes of WW1. I could recommend a plethora of books that you can read that explain the consequences in great detail. 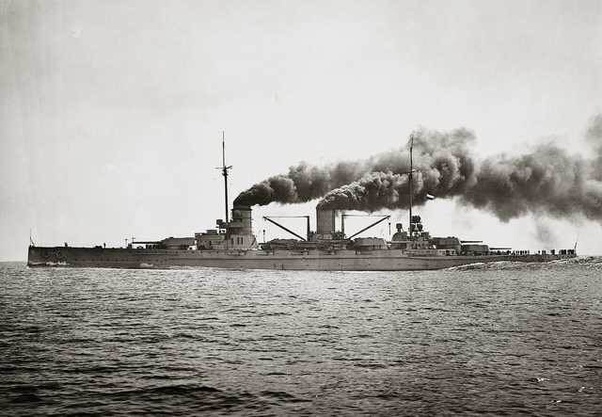 This Imperial German battlecruiser was named the SMS Goeben and during WW1 it was commanded by Admiral Suchon. The ship, along with an escort, SMS Breslau (pictured below), journeyed across the Mediterranean Sea during the first month of the war. During this voyage to Constantinople, the ships had to repeatedly evade the French and British naval forces. The British in particular, failed to understand Souchon’s intentions. They predicted that the Goeben would eventually turn away from the route to Constantinople and turn westward, aiming for the Atlantic. They underestimated the importance of the Ottoman Empire in Germany’s overall war strategy.

When the battle ship reached Constantinople, the Ottoman Empire had maintained it’s neutrality in the war. From this point on, the Germans took a series of steps that ensured an Ottoman alliance with Germany. The first, gifting the Goeben and the Breslau to the Ottomans. Even though they were still commanded by Sochoun, they now carried the Ottoman flag. There were disputes within the leadership of the Ottoman Empire in regards to who they should support during the war. The increased presence of German personnel along with the fact that the Goeben was in position to easily bombard the Ottoman Empire enhanced Germany’s position. This also empowered Ottoman Minister, Envir Pasha, who, despite resistance from others in the Ottoman leadership, had been pushing for an alliance with Germany.

Ultimately, Sochoun, now the commander of the Ottoman Navy, took the Geoben, with the Ottoman flag and bombarded multiple Russian ports. The Russian declaration of war officially brought the Ottomans in to WW1, and on the side of the German Empire.

I would argue that almost the entirety of the modern day Middle East Crises can be traced back to the breakup of the Ottoman Empire. The dissolution of the empire gave rise to the new nations Turkey, The Arab Republic of Egypt, Iraq, Syria, Saudi Arabia and set the basis of Israel (with the Balfour Declaration).

Historian don’t like to speculate. But it’s still fascinating to wonder where the world would be today had the British Navy decided to engage SMS Goeben and Breslau before they reached Constantinople.