Danes committed murder to be executed. They ment it was a safe way to Heaven. 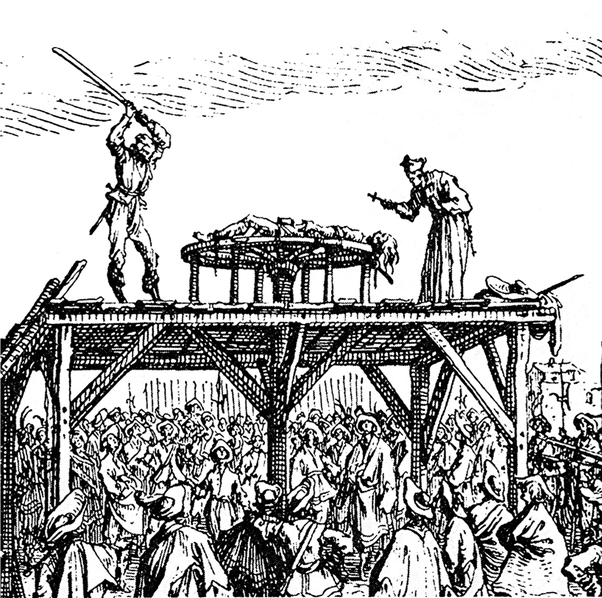 In the 1700s, it was thought that suicide led to hell. Depressed people therefore killed innocent children to be executed and avoid the flames of hell.

The soldier Michel Blödorn was stuck on the scaffold one June afternoon in 1739. He would be executed for murder. From his mouth a hymn sounded so loudly that the tones could easily reach the ears of the many people gathered at Kongens Nytorv in Copenhagen to see the execution.

The executioner smashed one shin so the bones were broken. Then the turn came to his second shin, to the thighs and to the upper and lower arms. But Michel Blödorn kept singing.

Nor when the executioner stab Michel on the wagon wheel, which was placed on a high stage at the gallows outside Østerport, he took notice .

The hours went by. In turn, priests crawled up to the disturbed man by a long ladder. They prayed with him. And they held a hymn book for him so that he could sing with a clear voice together with the total crowd. But no matter what, the hard-injured man could not die.

When it came to night, there was a command from the king: The murderer Michel Blödorn would suffocate in silence.

The German soldier Michel Blödorn had committed the worst crime that could be committed in the 1700s Denmark. He had murdered another human being – to be executed himself.

Its was suicide killings. The phenomenon was very common in the 1700s

People who were bored of life – suicide candidates – failed to kill themselves. Instead, they typically murdered a child or a random person. The purpose was to receive a death penalty and subsequently executed.

In 1536 a “reformation” of the church was carried out in Denmark. Then the country went from being a Catholic-Christian country to being an evangelical-Lutheran country.

The new view of Christianity had a major influence on daily life in Denmark. Among other things, because the laws of the country were changed so that they matched Luther’s thoughts. The changes in the law meantthat the reason for suicide killings was founded

In the 1700s, citizens in Denmark were generally much more religious than they are today. And according to the church you came to hell if you committed suicide.

On the other hand, people received a direct ticket to Heaven if they regretted their terrible acts just before execution. This perception originated from Church Reformator Martin Luther’s (1483-1546) view of Christianity.

Luther believed that you was saved by acknowledging your own sin, by in heart repenting your sins and believing in God.

The last moment of life was the most important time to regret its sins and believe in God, because you could no longer be sinful. So if a death sentenced really repented, it was believed that the soul would have to be saved.

The wave of suicide blamed over all the Evangelical-Lutheran countries in northern Europe.

Unlike the Catholic Church, the Lutherans took the laws of the Bible’s Mosaic Law very literally – and the laws required the death penalty for murder.

When God demanded the death penalty, there was not much to wrap around for the god-feared Danish authorities. It posed Denmark – and the other Evangelical-Lutheran countries – in a very special situation:

On the one hand, killers should be executed

On the other hand, murderers could escape the torment of hell.

It made it attractive for suicide candidates to become murderers.

The state therefore introduces the hardest sentences in history

When the suicide killings had been ravaging for several years, it came up to the Danish judiciary that something was completely wrong.

Officials realized that the country’s penalties did not work, but on the contrary, the reason was that random innocent people were killed by suicide killers.

The state was deeply concerned. So they reacted by legislating that suicide killers should have the hardest known death penalty in Denmark’s history,

Suicide killers should be whipped, knuckled and smashed

The soldier Michel Blödorn received one of the sharpened sentences in 1739. When he was a soldier, the punishment became particularly tough.

In the military court – as convicted soldiers – the sentence of suicide kill: whip once a week for 9 weeks until execution. Then the soldier had to be wrecked and still alive on the wheel to die of his injuries.

In civil law – like convicted ordinary citizens – the suicide killers had to be partly burned five times on the road from the arrest to the scaffold. Then their hand should be chopped off after which the head was cutted of. In the end, the dead body should be exhibited on a big wheel to mock, scare and alert – wheel and steep.

People believed that execution was a safe way to salvation. Although the punishments for suicide became insane hard they just helped the person . In the population, That execution was seen as the safest way to the salvation of souls. Songs were written and preformed, telling how the murderers were excited to be executed. They looked forward to coming up to heaven and in white clothes sitting in front of God’s throne. The view was that the more painful you experienced in connection with execution, the more sure you were in a place in heaven.

The perception was poison for the state’s efforts to find a punishment so severe that it could stop suicide killers.

As the hard sentences did not help, one of the 1700s most respected lawyers, Henrik Stampe, suggested that the great problem solved by abolishing the death penalty for suicide killings.

However, it was contrary to the divine death penalty imposed by the Lutheran countries for over 200 years. Therefore, the proposal was initially rejected by both theologians, lawyers and government. “However, the number of suicides continued to grow, and ten years later in 1767, Stampe’s proposal became law. Now the murderers were whipped once a year and put to the toughest and most profane work. It finally slowed down the suicide killings.

In that way Denmark became a pioneer country when it was abolishing the death penalty. But it was not something they were proud of. The decision was a violent violation of the religious understanding of the criminal system. Eventually, other countries followed – including Preussen,

Maybe you believe suicide killings are something that belonged to the 1700s. But today too, the terrible murders are committed in countries that have the death penalty. Infact, they are known too as suicide killings . Researchers have found several killers who committed their killing alone with the goal of being executed. The suicide killings in the United States are not nearly as frequent as those in the 1700s. But it shows that the suicide is a condition of having a death penalty. There will always be someone who feels attracted to being excecuted

. The book of Krogh, Tyge: A Lutheran Plague – Murder to Die in the Eighteenth CenturyArticle of Suicide In Today’s United States: Van Wormer, Katherine et al, The Psychology of Suicide-Murder and the Death Penalty, 1999. Journal of Criminal Justice, 27 (4), 361-370